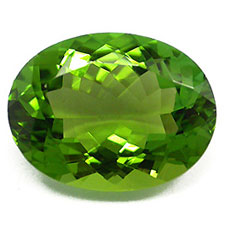 We use the term "tourmaline" followed by its color, so the verdelite becomes a "green tourmaline".
Verdelite [green / lithium]: both Latin and Greek meaning green stone. This Tourmaline goes through all shades of green with its shades of yellow and brown.
Like all natural stones, tourmalines are crystals with small details called "inclusions". These inclusions appear in the structure of the stone during its formation. As such, they should not be seen as faults but rather as a seal affixed by nature, witness to the long process of stone formation.
The purity of a stone depends on the size, quantity and arrangement of its inclusions. A very good quality tourmaline will have tiny inclusions invisible to the naked eye.
The higher the degree of purity, the higher the value of tourmaline.

The word “tourmaline” comes from the Sinhalese “thuramali”, which means “stone with mixed colors” and which indicated all the stones whose name we did not know especially. What a beautiful name for a stone arriving on Earth crossing a rainbow, imbued with all its colors, as the Egyptians believed.

The Green Tourmaline in astrology

Green tourmaline is the birthstone for October children.
It is the astrological stone of the sign Aries.
It is traditionally offered for the 52nd wedding anniversary.

The Green Tourmaline in lithotherapy

It is undoubtedly its electrical properties which explain its use in geobiology. Tourmaline is known to protect habitats against bad waves, whether they are of technological origin (wifi network, mobile phones, etc.) or natural.
Promotes good sleep. Strengthens the immune system. Predisposes to the joy of living.

Take care of your Green Tourmaline

Our selection of jewelry in Green Tourmaline

Sorry for the inconvenience.

Search again what you are looking for