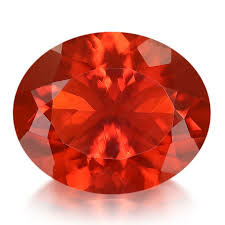 The fire opal is remarkable among all opals by its color ranging from yellow to dark orange almost red.
Mexico is the main producer of fire opal, which is found in the volcanic regions of the country.

Opal is an emblematic stone of Mexico because it was already used by the Aztecs with jade and turquoise for the manufacture of symbolic artifacts and jewelry. Like all opals, between 3 and 20 percent of its weight is made up of water. This makes it a relatively fragile stone, which can crack if it dries too much.

The opal associated with fire, is a mineral considered as a precious stone, with a very special dimension by Roman civilization. Its origin would come from the name Sanskrit upala, then was nicknamed Pandora or even empress, in honor to the fire opal of "the Trojan fire", in homage to the gift received by the empress Joséphine de la part of the great Napoleon 1st.

Although there are some exceptions for stone, it generally forms in a sedimentary environment, near volcanic activity. This is the case for the Mexico region, but also for the Australia region, it ultimately results from a secondary alteration, starting from the dissolution of chemical elements which will be centralized inside.

The Fire Opal in Astrology

Opal is the birthstone for people born in October.
It is associated with several astrological signs: aquarius, gemini, fish, cancer, virgin.
It is traditionally offered for the 21st wedding anniversary.

The Fire Opal in lithotherapy

The Fire Opal restores the joy of life and increased enthusiasm. It helps develop the sense of developing the sense of creativity by increasing self-confidence. It can also awaken a repressed instinct.
It helps our positive thoughts to take over negative elements of our personality.

Take care of your Fire Opal

Opal contains water, so if you live in a very dry place, when you are not wearing it, keep it in a waterproof plastic bag with very slightly damp cotton, to avoid dehydration. Sudden changes in temperature should also be avoided.
Take into account its low hardness.

Our selection of Fire Opal jewelry