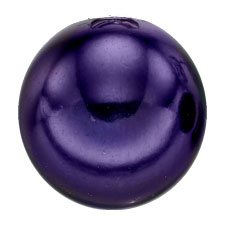 Produced by the oyster Pinctada margaritifera var. Cumingui, who lives in French Polynesia. Each oyster can receive only one implant. They are generally high for 18 months, sometimes longer. They reach a large size, thus producing naturally larger pearls whose diameter varies between 8 and 18 mm. Tahitian pearls are most famous for their dark color. However, the lighter ones can be almost white and the darker ones practically black, but they can also be rainbow, eggplant, blue, gray. The color is specific to each lagoon, each farm and the origin of the graft and the nucleus. The most vibrant colors are rarely perfect because they are obtained with the ends of the grafts which are thinner and more fragile and it is more difficult to prepare a regular graft.

Originally, pearl regions were located in the Red Sea. After these were exhausted, the deposits of French Polynesia were exploited. Extremely rare, the Tahitian pearl was found in one oyster in 15,000. In the 1960s, the cultivation of pearl oysters took a considerable scale in Polynesia, under the influence of Japanese industry which made possible the control of pearl production. The substitution of oyster fishing for pearl farming has made it possible to save endangered oysters. The pearl farms producing the Tahitian pearl are located in Polynesian lagoons and mainly the Tuamotu archipel.

The Peacock Pearl in Astrology

The Peacock Pearl in lithotherapy

Take care for your Peacock Pearl

Our selection of Peacock Pearl jewelry